Now Miami audiences will be among the first to enter the red-hot world of Touch of RED, as Miami Light Project, in partnership with YoungArts, presents the work’s first performances after its sold out world premiere at MASS MoCA in late October. Touch of RED runs Nov. 3 to 5  at Miami Theater Center.

“Tushrik and I are inside this very heated space creating an intensely intimate experience,” said Shamel, slightly breathless, speaking after a recent rehearsal at MASS MoCA. “Hopefully that penetrates the audience and becomes their experience.”

The Brooklyn-raised dancer and choreographer, who’s earned a string of prestigious fellowships and glowing reviews for his theatrically and visually riveting work, had just formed TRIBE, a multi-disciplinary group of BIPOC artists with a new kind of collaborative creative structure, at the end of 2019. When the pandemic forced Shamel and the rest of the world into lockdown a few months later, he found himself suddenly curious about the boxing matches that were always on TV at his family’s home and had always repulsed him. “I’d never gotten the appeal or entertainment value of watching two men, especially two men of color, beat the crap out of each other,” he says. “I always turned away. Until I realized I no longer wanted to turn away.”

Instead, he was compelled by the ambivalent closeness of combat. “There were these blurred moments between two boxers where it was unclear whether they were fighting or embracing, wrestling or consoling,” he says. “What happens when two men of color get into a ring with each other, and there’s a match, but not out of combat or violence or even winning or losing, but out of an intense intrigue with one another?”

Shamel began to explore how that mutual intrigue, that fraught skin-on-skin closeness and in-the-instant awareness, could go from violence to vulnerability. Rehearsing with Tushrik, a younger dancer and TRIBE member from South Africa who has gone from student to collaborator, the pair kept discovering new physical and psychic connections. How did tension become closeness? How much and how would they, as two queer Black men, reveal different facets of themselves to each other, and to the audience around them?

Shamel brought in LaTasha Barnes, a renowned Lindy Hop performer and innovator, to add that dance’s lightning footwork and exuberant partnering to the piece. He drew on his experience dancing with Ohad Naharin’s Israeli troupe Batsheva, and as a teacher of Naharin’s wildly liberating gaga movement language, to find new ways to release physically. “How can we be very soft and very quick?” Shamel said. “I won’t dance the same forever. Something I gained in working with Gaga was letting go in order to move.”

The piece’s many collaborators bring intricate – and integral – layers of meaning to Touch of RED. Set designer Mimi Lien (a Tony winner and MacArthur “genius” fellow) encloses the two oscillating dancers in an abstract boxing ring, two fabric squares horizontally split by open space, so that the audience, seated around them, peers voyeuristically inside. Sivan Jacobovitz created the original musical score and most of the soundscape. The costumes are by designer Dion Lee, whose fashion plays with an exquisite architecture of exposure that echoes the voyeurism of the set, while techno DJ and soundscape artist TT Britt, one of Shamel and Tushrik’s favorite DJ’s, shared styling duties with Tushrik – helping bring the two dancers’ love of club dancing to the piece. “Part of how Tushrik and I have grown as performance partners is on the dance floor at night around the world,” Shamel says. “We dance with a lot of heat and intensity, lightness and spark. So this work was an opportunity to bring that back.”

Miami Light Project and YoungArts played a crucial role in bringing Touch of RED to life. Shamel was a YoungArts finalist in 2003, a life-boosting experience that led to his being awarded a vital performance residency during the pandemic. YoungArts Artistic Director Lauren Snelling enlisted MLP as a collaborating sponsor for the piece. MLP’s participation allowed the two Miami organizations to apply for and receive a National Performance Network Creation Fund grant, commissioning Touch of RED and bringing in Jacob’s Pillow (which also hosted a Touch of RED residency) and other organizations around the country as co-sponsors and presenters.

A two-week technical residency at The Light Box late last summer allowed Shamel and his TRIBE collaborators to deeply explore vital visual and design components for Touch of RED. Light and lighting are integral to Shamel’s work and ideas; his BLACK series made dramatic use of darkness in a way that was both visually thrilling and invoked multiple connotations of blackness.

Rus Snelling and Lucca del Carlo did the lighting design, and Lucca the video mapping, for Touch of RED – painting the space with many shades of meaning. “There are more than fifty shades of red,” Shamel says. “Not only color and colorfulness and the boldness of red, but also its depth and its sheen, its ability to reflect.” The piece begins a new color series and a new exploration for Shamel and TRIBE, not just of the color’s visual aspects, but its many human and other dimensions – passion, ferocity, brilliance and heat.

Which Shamel hopes audiences will be pulled into a heated communal experience that’s the antithesis of the cold, screen-mediated alienation of lockdown. Seated in the round, the audience will peer into the dancers’ passionate arena and through the set at each other – everyone brought close in the fiery ritual of performance. 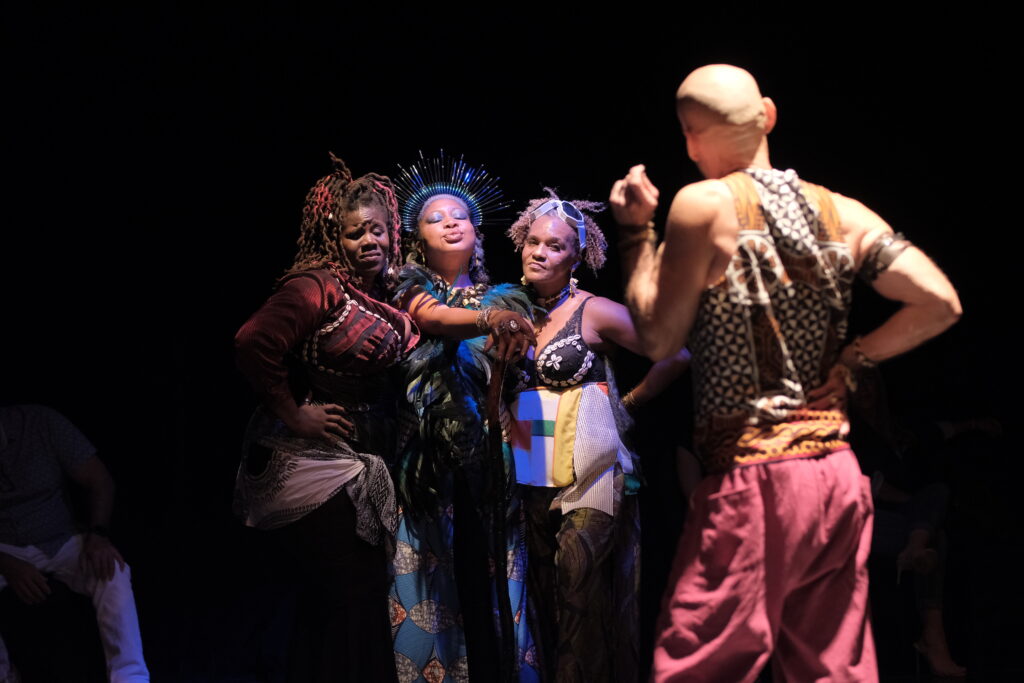